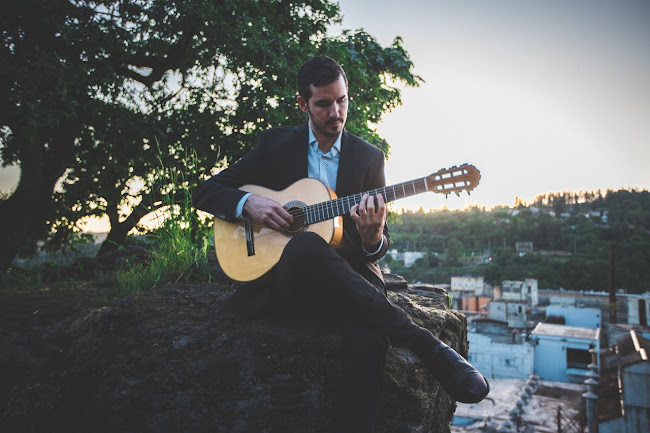 Guitarist David Tutmark maintains a busy schedule in the Pacific Northwest as well as performing abroad. After earning a Bachelor’s degree in classical guitar performance from PSU, David began a successful performance career, giving over 350 concerts between 2012–2019. David has toured extensively as a soloist as well as a member of the an international guitar duo, performing in Chile, Mexico, Italy, and across the United States. In 2018 he did an extensive solo tour of Chile as part of the Entrecuerdas guitar festival. In 2019 David was a featured artist at the international concert series in Lima, Peru "Cuerdas al Aire" He has also performed for the US consulate in Pakistan as well at Pakistan’s premier music festival Lahooti Melo, for an audience of 20,000. David is also on faculty at Clackamas Community College in Oregon City Oregon where he is the professor of classical guitar. Throughout 2019, Mr. Tutmark has been working closely with a Portland based composer to create a new concerto for guitar and orchestra which David will premier in 2020. In 2018 David’s passion for the guitar led him to create a new classical guitar concert series in Portland Oregon call “Siempre La Guitarra” which features incredible guitarist from all over the world. Whether for audiences large or small David is known for his visceral yet polished style of playing, and consistently delivers captivating performances of traditional and contemporary classical guitar.